upcycle
ˈʌpsʌɪk(ə)l/
verb
gerund or present participle: upcycling
1.
reuse (discarded objects or material) in such a way as to create a product of higher quality or value than the original.

The term upcycling is becoming more popular in today’s throwaway society as those who have had enough, find uses for items that others believe have no worth. In investigating this phenomenon I have discovered that upcycling is actually something that our grandparents used to do on a regular basis. During the great depression when money was scarce, many children wore clothes fashioned from the worn out dresses of their mothers and uses were found for just about anything.
(I wonder if at the time of filming Sound of Music, they would have thought that Frauleine Maria was a trendsetter when she upcycled the curtains in the children’s rooms into clothing)!
I’m sure my mother (who no doubt will read this) will have examples of times her grandparents have reused items and converted them into something else.
In the past, I have used tin cans and covered them with paper, ribbons and buttons to make holders of various sizes. And many would remember seeing gardens that have old car tyres that have been cut and painted to resemble swans. The gentleman down the road has a wheelbarrow in his front garden filled with flowers.
These are just a few ideas of upcycling.
So what bought me to this post? It would be reading the post at Something to Ponder about her 30 Minute Makeover. I commented about a bar made by my wonderful Garden Gnome and I was asked to share photos lol
The old fish tank stand (I thought it was a table) that was used by my man had been sitting in our garage for years. It had originally come from the local second hand store and was used for stacking stuff on in the shed. When we moved, he found a way to re-purpose it. He doesn’t think this is much, but I love it! He has sanded it, stained it, clad it and put castors on it so we can take it outside when we have a BBQ. It has shelves underneath and also fits two bar stools (currently stored behind it). 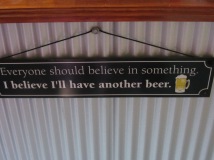 And not to be outdone. My attempt at upcycling.

33 thoughts on “Upcycling – The new buzzword”