It’s no secret to those of you who follow along with me regularly that I love to travel. I also love to take photos. I’ve now decided that each week I will share some of my travel photos with you and call it “Through my Lens”.
Of course, I have a million photos clogging my hard drive but I will share only a few here and there.Many years ago, we travelled to Victoria by plane to catch up with the Middle Child. Hiring a car at the airport, we surprised the boy and spent a couple of days in Melbourne before travelling through Victoria.

Whilst waiting for the Son to finish his work for the day, we walked through Melbourne. Melbourne is an easy city to walk as it is mostly flat. The public transport system in Melbourne is wonderful with trains, buses and trams running regularly. We had left our car at our motel about 10 minutes out of the city and come in by tram.
The above photo is of Flinders Street Station. One of the most photographed landmarks in Melbourne.

The Middle Child was working in Melbourne involved with a project run by the Salvation Army working with those living on the streets. However the weekend we arrived was Red Shield and all available volunteers were out collecting. I was told that if I wished to spend time with the boy-child that morning, I should volunteer to collect at an intersection with him. We collected at the intersection of the gardens (home of the Sidney Meyer Music Bowl), Rod Laver Arena and the Collingwood FC. Melbournians are mad drivers and each time the lights went red, we took our lives in our hands as we darted between cars to collect.
The photo above was taken during one of our rest breaks and shows the Yarra River at its most beautiful.
We headed off the next day to drive the Great Ocean Road. We had no itinerary and just drove wherever the wind blew us. Unfortunately the Tween (who was a great deal younger at this time) suffered from travel sickness. Ask anyone who has travelled the Great Ocean Road and they will tell you it is full of twists and turns. This meant that it took us many days to complete the drive. We stopped for a break and went up to Teddy’s Lookout where I took a number of photos looking down onto the road.

I also took one of the obligatory shots of the road winding around the edge of the ocean however this one struck me with the beautiful greens and blues.

There are many beautiful little towns along the drive. We stayed in quite a few of them but enjoyed our time in Apollo Bay. This picturesque little hamlet is a fishing port and has such beauty both along the shoreline and further inland where we visited Erskine Falls.
Most people travel the Great Ocean Road to visit the Twelve Apostles. We actually drove past and spent the afternoon at Loch Ard Gorge where we spent many hours walking the tracks and learning the history of the wreck of the Loch Ard. The barren and windswept landscape and cemetery held a beauty all its own. 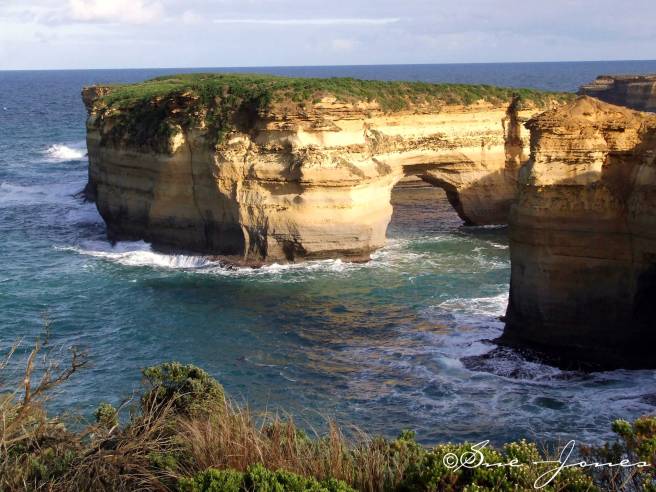 Of course there are many more photos of this beautiful place but I won’t bore you with them all. I will say that if you ever have the opportunity of driving the Great Ocean Road, then take the time to visit the Gorge as it is truly stunning.
The next morning we drove back to the Twelve Apostles.

As we had no itinerary, we often went off the beaten track. It was doing this (and from a book on shipwrecks that I had purchased to read as we went) that we learned about Moonlight Head and Wreck Beach. We reached there late afternoon and we were the only ones there. After a walk down 300 steps (oh my aching knees) we reached the beach. It was overcast and squally and was breathtakingly beautiful. We walked to the wrecks (only anchors left there now) but didn’t quite reach the anchor of the Fiji as the tide was coming in and we would have never been able to get back if it reached the headlands before we did.

I’m so pleased we took time to travel the Great Ocean Road and spent time exploring off the beaten track. I want to do the road once more and spend even more time doing it as there were many things that we missed.

Next time, I’ll share some of the inland photos and more of Melbourne. 🙂

36 thoughts on “Through my Lens”