There are things that happen in life sometimes that leave people scratching their heads. Some would say that it is coincidence.
Some praise God for having a hand in unfolding events.
Whatever the conclusion reached there are sometimes events that occur that defy explanation and leave you feeling as if you were somehow a part of a great plan written by someone else.
Such was the case with the life of tiny Suzanne Joy.
Regular blog readers know that I was excited at the beginning of last week about the impending move of the Son and his wife back to our town.
After his attempted suicide and short stay in the psych ward at a hospital in the city he lived, we decided it would be best if they undertook the huge move back to live near family. Although we kept in touch by facetime, emails, texts and phone calls, it was great to be able to look forward to actually being there and to be able to psychically help them out when they needed it.
Life in Melbourne was tough for them both with no family close by. Yes, they had friends (and awesome ones at that) but sometimes only family can help.
With the Son struggling with a mental illness and his wife struggling to cope also, the knowledge that after two years of fertility treatments they were carrying a baby got them through.

On my visit down there, talk got around to baby names. The kids shared with me the names they had chosen and I was overjoyed when they told me the name they had picked for a little girl – Suzanne Joy. Name for both of her grandmothers.
What an honour.
A week or so after our conversation, they had an ultrasound that showed that they were in fact carrying a little girl. Afterwards, our conversations were always peppered with references to little Suzanne. Both my son and daughter in law readily admit that if it weren’t for the fact that Suzanne was going to be a part of their lives, they would have given up long ago.

And so we come to the past week or so.
The Garden Gnome and my son’s best friend had flown down to their home to help load the truck, clean the house and then undertake the long drive back home. The plan was to leave on Tuesday morning however things were running ahead of schedule so they left on the Monday afternoon. This meant that they would arrive in plenty of time for the Tween’s awards night at school and the wedding of a family friend of my DIL’s on the Friday.
Regular phone calls and texts from the travellers kept me apprised of just where on the journey they were.
At about 2pm on the Tuesday afternoon, I received a text from an excited DIL who admitted that she was tired and in desperate need of a shower.
At about 2.30pm the Garden Gnome called me to tell me that he had arrived at our Son’s unit (apartment). I drove down (about 5 minutes) to take the men cold water and something to eat. My son and DIL were in town picking up the keys and I passed them on the road when I drove back home to pick up the Tween a short time later.
We hurried back and began helping them unpack items from the car and truck. After about 20 minutes, my DIL began to feel unwell and I suggested she grab some clean clothes and come back to our place for a shower and a rest whilst the men finished unloading the car and taking the essentials from the truck. The rest of the unpacking could wait.
On the way, she informed me that she was having pain and asked if this was normal. We both agreed that it was probably a combination of stress and Braxton Hicks contractions and agreed to see how she felt after her shower.
By the time she had finished her shower, the men had arrived back home. They too were in desperate need of a shower and my son headed into the bathroom to clean up as well.
As he came out of the bathroom at around 5pm, my DIL cried out in pain and I suggested that my son take her to our local hospital.

Twenty minutes later, I was sitting on the couch and reading when the phone rang. The Tween picked it up and said “No. Hang on. I’ll get her” before handing me the phone. I asked her who it was but she just shrugged.
“Sue speaking” I said as I took the phone from my daughter.
“This is Sam. I’m a midwife at the hospital. Your son and daughter in law have asked me to call you and let you know that she is in labour.”
I was gobsmacked. My DIL was just 25 weeks pregnant. I blurted “Can you stop it”?
Her reply was that labour had progressed too far and that my children wanted me at the hospital. I quickly changed into more suitable clothing than the shorts and tank top I was wearing, called the First Born to let her know what was going on, grabbed the car keys and raced out the door.
I live a three minute drive from the hospital but it seemed to take forever to get there.
At this point in the story, I need to tell you a little bit about our hospital. It is small. and
13 years ago the maternity section of the hospital was closed down. This meant that mothers had to travel to hospitals either on the Gold Coast or in Brisbane to give birth. For those living on farms or in the rural areas, this was a huge blow. I, myself had to travel to Brisbane to have my Tween. Earlier this year, the maternity section was reopened but only for mothers who were considered low risk. There is nothing in place for emergency deliveries or for premature babies so having my daughter in law in advanced labour was something they had not expected or were prepared for.

As my DIL’s labour progressed, more and more people began coming into the room. Every midwife on duty was there and doctors had been called away from their meals at home and back on duty. They filled the room.
(We later found out that the team on duty had extensive experience in premature births having worked at the largest children’s hospital in the city before coming to our little hospital. I was informed by staff that the timing of this was amazing).
At 6.55pm  and weighing just 800 grams tiny Suzanne Joy made her way (backwards) into the world. I was ecstatic.
The kids didn’t have time to see her before she was whisked onto a cart.
I had my heart in my mouth and held my breath as I watched them perform CPR in an attempt to get her to breathe. I exhaled as she began to breathe on her own.
A team from the best children’s hospital in Brisbane had been called and she was to be transferred to that hospital as soon as possible.
I gave my little camera (that I always keep in my bag) to one of the midwives when she suggested to me that she could take photos. We are so blessed that she did this.
During this time, the First Born and my son’s other half sister had arrived and were doing their best to cheer up the new parents.
I raced out to the store to gather supplies and then home to find some nightwear for my daughter in law.
Amazingly, my DIL’s parents had arrived in Brisbane that afternoon. They live 750kms away but had decided to spend a few days by the ocean before the wedding they were also attending. They were called and made their way to the hospital.
Just over 2 hours later during the handover between the two teams, little Suzanne Joy gave up her fight. We didn’t grieve on our own. The medical staff grieved right along with us and one particular midwife sent another midwife back to her own home in order to collect clothes to dress our little girl in. (They had been made by her sister not long ago and she intended to deliver them to another hospital).

Later testing revealed that our little girl suffered from Trisomy 18. Doctors were amazed that she had lived this long as most babies who have this don’t live past the first trimester. We were amazed that with all the tests that my daughter in law undertook, none showed any evidence of Trisomy 18. I believe that if the children had known this earlier then things may have ended differently for all concerned.

In conversations with the midwives much later, I also learned that because of Suzanne Joy’s birth practises at the hospital have been changed. (Not that we were upset in any way with the handling of her birth but they felt that there were little things that needed to change in the event that this ever happened again). Whilst they grieve the loss of little Suzanne, they said that she had taught them a lot.

So many things – coincidences (if you like to call them that) or God-incidences (if that is your preferred word) have occurred that have had many people pondering.
I am of the belief that there is a master plan. We may not know it and we often stumble along in life but every so often an angel comes along and then we know that life has more meaning. 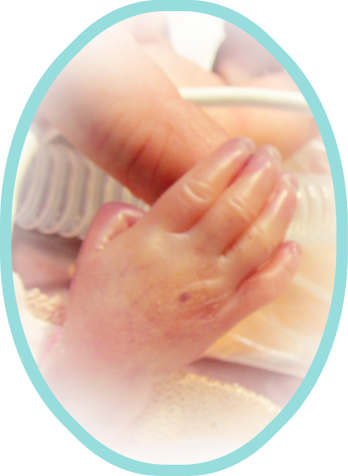 56 thoughts on “Touched by an Angel”