Literally.
Well at least in some parts of Brisbane and surrounding areas if not in our own town.
Yesterday the first of this summer’s ‘good’ storms began with the sound of distant rumbles at about 1.30pm.
The Garden Gnome was out polishing up our pride and joy (Anna the Holden Kingswood) so that he could escort a young graduating couple to their High School Formal this afternoon. He came inside for something and I asked whether I was hearing thunder. He replied that he thought so and that it was awfully black out toward the border ranges so I looked up the BOM (Bureau of Meteorology) site and sure enough there was a line of storms along the border however there was another storm cell that looked as if it might come in our direction.
A while later, the GG came inside and mentioned that there were some good lightning strikes to see.
I set up the camera and went outside. Bombed out on photos but man we were entertained by some amazing lightning.
As we only copped the edge of the storm, we didn’t think too much about it until the 6pm news came on. It mentioned that parts of the city had been hit pretty hard with flash flooding and that the rail system had been shut down.
Generally, the Son works from home but this week he returned to work and has had to attend training just outside of the city. This entails a 40 minute drive to a train station, commuting into the city, changing trains and then commuting to his head office.
So I texted him and asked how things were going. He replied that he was stuck at the first train station and had been for a while.
Text conversations went back and forth for some time before he let me know that the trains had begun running and he managed to get a seat on a very cramped and overcrowded one and was on his way home. It meant that he would arrive home an hour and a half later than expected but all was good.At 8.15pm our phone rang. We all shot questioning looks at each other as to who it might be. The Tween answered the phone and with a serious look on her face handed the phone to me.
“Mum. I’m alright but I’ve been in an accident. The car hit a patch of water before spinning out of control and is down an embankment.”

Not the first time I’ve received a “come help me, I’ve been in an accident” phone call from a child but hopefully the last.

I rang my DIL to let her know, picked her up and then we drove to pick the Son up from the home of the woman who had been following him. She had stopped and helped him out of the car but didn’t want to leave him stranded on a dark section of isolated road so had taken him to her nearby home for a strong coffee.
Mercifully, he was fine (although shaken up).
The fact that he had been slowing right down to 50 km p/h to take the corners also aided in saving his life. He also managed to find a clear patch amongst the trees although he swears he nearly fainted as he saw a tree bearing down on him before he came to rest in the mud.
Equally amazing was that there was no oncoming traffic on this busy road as he apparently completed a couple of 360° spins before finishing his journey over the edge of an embankment on the opposite side of the road.

I rang around to find a towing company who could come to pull the car out. Since the accident, it had slipped down a little further in the mud and couldn’t be driven out as it was too steep and muddy to do so. They informed me that it could be up to an hour and a half wait before they got there as they were incredibly busy due to the storms and rain.
Whilst we were inspecting the car and even whilst waiting in a driveway across the road, many, many people stopped. Some even got out of their cars and began calling out believing that someone may be still trapped in the car.
They all heaved a huge sigh of relief when we yelled back that everyone was out of the car and fine.
Thankfully, the tow truck arrived much sooner than expected and pulled the car out.
Other drivers stopped and went up the road to warn cars coming around the bend.
Once again, we were incredibly touched by the kindness of others.

The car was pulled to the edge of the road and we all held our breath as the GG jumped behind the wheel and fired her up. She purred. And she was still driveable.

This morning, I was awake at the unearthly hour of 4.30am and once I got up to visit the bathroom I found that going back to sleep was not an option but I lay in bed anyway.
As I lay there I began to think of an exercise that I want to do with my children.
It goes like this:
Draw a line down the middle of a blank piece of paper.
On the left, write all the horrible things that have happened this year. Now think about the first one and in the right hand column write out the blessings that have come out of that event.
I actually think that the list on the right will be much longer than the one on the left.

Life has a way of bringing us beauty and blessings in the strangest of guises. Last night could have ended tragically but it didn’t.
I can’t help feeling that the Son has much ahead of him to do in this life. 🙂
(Actually, I think I might just do that exercise as well). 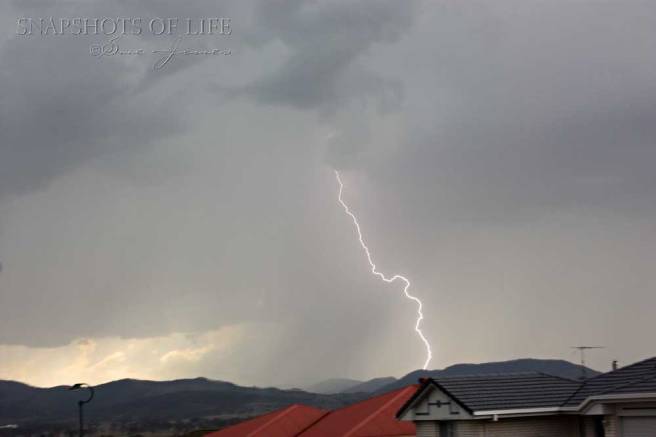 (This wasn’t yesterday’s storm but the one the other day. The lightning bolts yesterday were ten times bigger than this).