My weekend began at 3.15am on Saturday morning when i woke up and then wouldn’t allow myself to go back to sleep in case I slept in past my 3.45am alarm.
The son and my DIL were picking me up at 4am so we could travel into Brisbane to the top of Mt Coot-tha to see the sunrise.
We got there as the sun was rising as a ball of red fire in the sky. The son attempted to stop on the way to the top to capture it but there were far too many gum trees in the way so we continued on to the summit. Reaching the lookout I raced from the car (camera in hand) but the sun was over the horizon by that time.
Looking at my photos this morning, I rue the fact that I don’t have a polarising filter so I’ve had to discard a good many of the photos that I took due to the direct light in the camera.
Still, I managed a couple of nice photos of the city with the fog over it and the way that the sun coloured the fog in places.
Brisbane is such a pretty city but I have decided that next time I go up to photograph the sunrise I will have polarising filter and/or an ND grad filter. 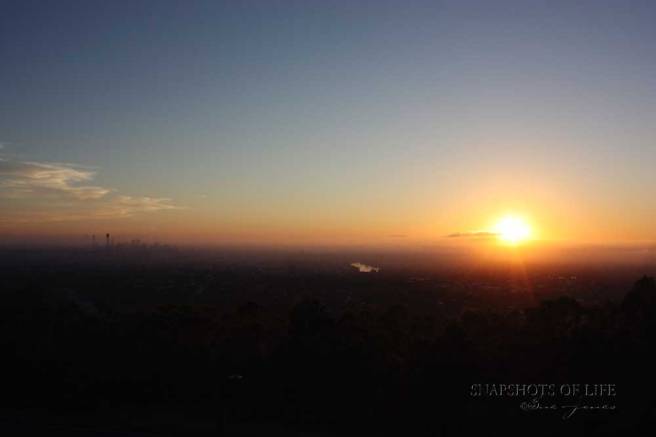 38 thoughts on “Sunrise in Brisbane”